The most common problem in navigation is the accumulation of directional errors. Insects solve this problem by using a neural compass based on external celestial. In our recent work we hypothesise a computational model that explains how a neural circuit could convert polarised skylight to a compass output, given realistic constraints based on the insect’s sensor array operating under natural skylight. This model can estimate the solar azimuth and elevation, as well as the certainty of its estimations, using only the polarisation pattern of the sky. It can compensate for head tilt and the change of the sun position over time, thus reducing errors that would arise in uneven terrains and during long journeys.

In this work, we demonstrate the robustness of the sensor in realistic scenarios and test whether it can be efficiently used as input to an existing neural model of insect path integration. More specifically, we designed a set of experiments for our model that allow the validation of its performance in the path integration task. We simulate canopy-like disturbance, covering parts of the sky and measuring the error of the sensor. Different terrain complexity is emulated by changing the maximum and minimum altitude of a predefined uneven terrain, producing up to 52 degrees of tilting angle (1m altitude variance).

Our results show that, both in a simulation and a prototype of the sensor (see inset in figure), the error of the sensor is proportional to the disturbance level. However, this did not significantly affect the performance of a simulated insect integrating its path. We observed that when the experimental set-up is realistic enough, the sensor’s errors tend to be systematic. This means that errors occurring due to sky disturbance and tilting of the ground during the inward path tend to cancel out the respective errors in the outward one. We suggest the sensor layout and subsequent neural processing has evolved such that the animal’s interaction with its environment tends to compensate for disturbances, reducing the computational complexity of the compass processing required for robust path integration. 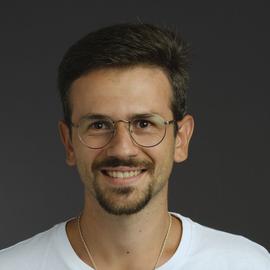